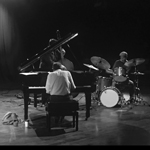 This recording of Eronel came from the same series of live recordings that produced the full-length records "Threes" and "Tag Book". Those recordings have been released as CDs on Ears & Eyes Records and can be found here

This recording was made live at Constellation on February 12th, 2015.

added to the PCM archive December 2017